Arriving on the final weekend of the 7th New York Asian Film Festival, first-time writer-director (and former janitor) Yosuke Fujita's Fine, Totally Fine (Zenzen daijobu) rates as one of the latest installment's unqualified highlights, and one of the funniest pictures to screen inside or out of the fest midway into 2008. Whereas Hitoshi Matsumoto's previously-screened Dainipponjin found its comedy in its satirization of the classical monster genre, video game aesthetics and reality television - as well as its study of the nation's evolving values - the grist of Fine, Totally Fine's humor is its finely sketched characterizations.

The first of her three suitors is Hisanobu (Okada Yoshinori), a hospital administrator who hires Akari as a janitor and manages a second older woman who repeatedly claims that he is the only person in the world who is actually nice to her. He really is that nice, which leads him to a rather uncomfortable evening in the latter's flat. Here she assures him that she won't "rape" him; the older lady assures Hisanobu that she has "graduated" from that. Indeed, Hisanobu often plays the straight-man, be it in his encounters with his employees or those with his fellow twenty-nine year-old pal, Teruo (Yoshiyoshi Arakawa).

Teruo, an overgrown adolescent whose dream is to revolutionize the haunted house industry, and whose greatest pleasure seems to be frightening young children, matches Akari punchline for punchline. Teruo's comedy is less purely physical, however, than it is the sum of his expressive responses (frequently to his elaborately-plotted shocks), his bizarre actions - at a business meeting he opts for a spoonful of sugar to a cup of tea or coffee - or more generally, his slow up-take. If anyone could be said to "carry" Fine, Totally Fine, its Arakawa. Of course, Fine, Totally Fine quite liberally shares its humor with its supporting players as well, as for instance Teruo's father whose peak occurs with an improbable, unexpected musical performance during a television broadcast (spoiler: its a love song about rice).

If it were to be said that Fine, Totally Fine was only as strong as its jokes, then Fujita's debut would be a very strong work indeed. However, the film's genuine sweetness and warmth, always worn quite lightly, be it in a gesture of kindness from a little girl (when a moment of discomfort seems imminent) or in the final exchange between Hisanobu and Akari emphasizes the work's depth, and moreover the maturity of a work framing its protagonists movement toward a belated adulthood - all within a Farrelly-esque milieu that matches the Brothers' hard-won affection for its under-dog heroes. 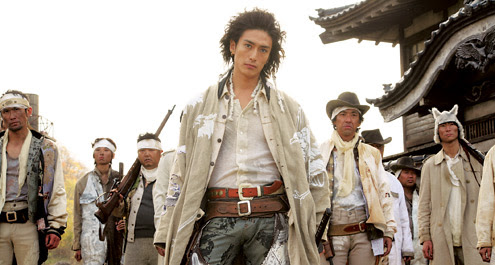 By comparison, Takashi Miike's Sukiyaki Western Django (2007) exemplifies nothing so much as it does a filmmaking that is unwilling to be anything other than sophomoric. Sure there's an intelligence here - Miike's translation of the genre finds an equivalent in the film's phonetic English dialogue, for example - but never is there a sense of stake or depth in Miike's work, to contrast it with Fujita's picture or even the best of Sukiyaki Western Django's most buzz-worthy supporting player Quentin Tarantino (i.e. Pulp Fiction, Jackie Brown and Kill Bill, Volume 2). Rather, Miike's soul-less cinema is all about its punchlines - never as funny as Fine, Totally Fine, though they do have a formal side in the director's tightly-framed reveals - targeted toward a public who want nothing more in the world (evidentally, if the Japan Society crowd is any indication) than a bad-ass grandma with an enormous dragon tattoo on her back. This is a film for Miike's audience, for his post-modernist public - a club that most certainly does not include this writer as a member. Yet even for today's small "n" nihilists, Sukiyaki Western Django may not exactly rate as major Miike, if its relatively lazy action set-pieces are any indication.
Posted by Michael J. Anderson at 8:17 PM