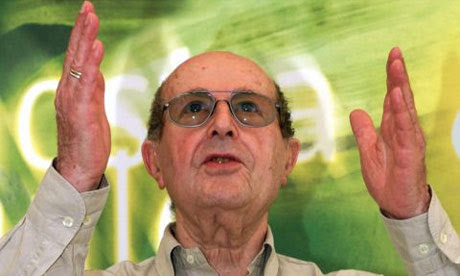 Manoel de Oliveira, one of the true giants of world cinema and a strong contender for the greatest of all Portuguese artists (in any medium), turns one-hundred today. It has been reported that Oliveira will spend the centennial of his birth on the set of his latest production, Singularidades de uma Rapariga Loira. Nothing could be more appropriate certainly, nor anything quite so gratifying for those admirers of Oliveira, who, much like myself, have long entertained this scenario. After all, does not a filmmaker who has succeeded in making more than one film per year throughout his nineties deserve to make history as the first active 100 year-old auteur?* That his primary subject has long been an ironized assessment of Europe's waning civilization - from the standpoint of an inheritor of its aristocratic high culture - makes his unparalleled time as a working artist all the more poetic. For those of us in the cinema, today belongs to one of our greatest masters.

For those who are less familiar with the director, let me direct you to a series of posts (linked to below) that I have dedicated to Oliveira during my three-and-a-half years writing for this site. The fact that I have written on the Portuguese filmmaker more than any other individual is I suppose the greatest testament I could offer to the artist's continued vitality; his films have inspired me to make my thoughts public like none other. Feliz aniversário, Manoel!

* Leni Riefenstahl's Impressions Underwater (2002) was released to commemorate the then-living German filmmaker's 100th birthday. Riefenstahl, however, shot the documentary film while still in her nineties.

100 years old and still on the set. It is just incredible! If ever there was a time to begin going through his filmography, it's now.