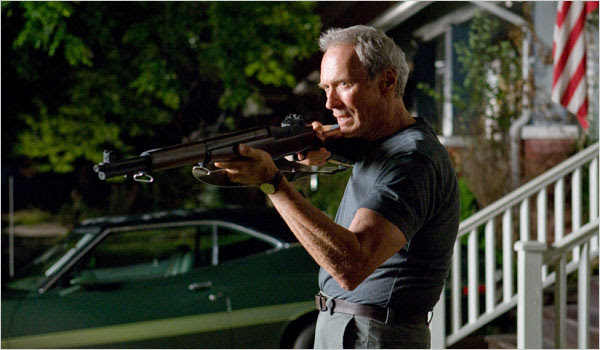 That Gran Torino represents actor-director Clint Eastwood's best work in four years should come as no surprise: after all, this is the septuagenarian hyphenate's first on-camera turn since his 2004 masterpiece Million Dollar Baby. Though Gran Torino perhaps does not deserve that film's well-earned 'best picture' and 'best director' statues, Eastwood's latest embodiment minimally merits a third 'lead actor' citation. Indeed, Gran Torino showcases Eastwood's latest 'Dirty Harry' incarnation in his scene-chewing best, very much in the supremely-entertaining Heartbreak Ridge (1986) mold. Perhaps the Academy will seek to reward Eastwood in the same lifetime-achievement fashion that it did Paul Newman in 1986? If so, Eastwood's award would coincide appropriately with what might stand as his final career summation.

Gran Torino locates Eastwood's Walt Kowalski in modern-day Highland Park/Detroit, amid a decaying urban-scape populated by gang members and first- and second-generation Hmong immigrants. And Kowalski: a Korean-war vet, widower and retired auto worker, whose semi-estranged sons have long moved on to the suburbs and foreign-model SUVs. Kowalski spends his days alone with his golden lab, drinking copious amounts of PBR, coughing up blood and grunting at the indignity of living among brown lawns and unkempt homesteads - and given less than the slightest justification, initiating an unending (and admirably varied) string of racist profanities.

Following the attempted theft of Walt's eponymous car and an encounter with Hmong gang-bangers on the neighbor's front lawn, Eastwood's character grudgingly integrates himself into the lives of his neighbors, laterally stopping African-American youths with a firearm from harassing daughter Sue (Ahney Her), while her "pussy" white boyfriend cowers on the side, and supervising brother Thao (Bee Vang) as he works of his debt. Walt is befriended by the plucky Sue and mentors the introverted Thao, even managing to find the latter employment on a construction sit, following an exceedingly funny set-up in which Polish-American Walt and his Italian-American barber teach Thao how to talk like a man; Gran Torino is one of the year's funniest films.

It is also one of the most harrowing. A subsequent, lawless defense of the hard-working Thao collaterally leads to the young man's wounding in a drive-by shooting and to Sue's brutal rape at the hands of her cousin's gang. Having thus prompted the violence, Walt settles on a course of action that ultimately leads to his character's Christic sacrifice, replete with a crucifix pose after performing a sacrificial gesture. (Eastwood belies his hostility toward the Christian faith with his supreme act of brotherly love.) At this moment, as likewise in the film's commencing expository dialogue, Eastwood's direction demonstrates a noticeably heavy hand nonetheless that does Gran Torino few favors. As with his weaker offerings of the past three years - namely, Flags of Our Fathers (2006) and Changeling (2008) - Eastwood's cinema does drift toward the tendency of producers Steven Spielberg and Ron Howard to overtly-literalize character psychology. Gran Torino is not entirely beyond their negative influence.

Nonetheless, this is an Eastwood film to its core, calling his famed character-construction to account for the vigilantism that manifests itself both locally and across a forty-year corpus. Here, the solution of sacrifice becomes the fated consequence of a life's work, unavoidable as it is imperative within the film's narrative logic. Speaking of, revenge is shown less to be immoral in Gran Torino (as it is represented in the similarly-revisionist Mystic River, 2003) than tactically-ineffective. Either way, the vigilantism of Dirty Harry (1971) et al. continues to reveal unintended consequences. Eastwood extends his auto-critique.

He also demonstrates a continued engagement with the present, which in the case of Gran Torino finds a form in his lament over white-flight and in a symbolic passing-of-the-torch to an immigrant next generation. With respect to the latter, Eastwood seems to favor assimilation in contrast to another 2008 flash point, Jonathan Demme's Rachel Getting Married, which assumes a more politically-expedient multi-culturalist perspective. Of course, none of the above makes Gran Torino particularly timely, which is unusual for the director of The Outlaw Josey Wales (1976), Heartbreak Ridge, A Perfect World (1993), Mystic River, Million Dollar Baby and Flags of Our Fathers/Letters from Iwo Jima (2006). In these films, Eastwood successively summons the spirit of post-Watergate distrust in institutions, Reagan-era patriotism, late Bush/early Clinton-era anxieties over single-motherhood, post-9/11 discourses of violent response, Terry Schiavo and Bush II-period wartime equivocations. However important in reality, gangland violence's current under-reporting in the media makes Gran Torino feel behind its time. Yet, in uncharacteristically extricating himself from topicality, Eastwood has again renewed his cinema.
Posted by Michael J. Anderson at 8:52 PM