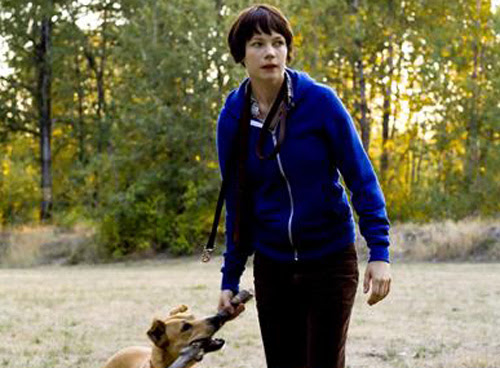 Kelly Reichardt's Wendy and Lucy, from a Jonathan Raymond story, commences with a credit sequence of freight trains arriving at a rail yard, followed by the eponymous Wendy (Michelle Williams) walking her companion Lucy (a yellow retriever mix) across an Oregon meadow. Reichardt's camera maintains an exceptional distance from her protagonists, signaling Wendy and Lucy's ensuing visual objectivity over an exceedingly long take. A woman's hum (subsequently revealed to be Wendy's) counters the image track. Following the film's title card, Lucy escapes into the woods, providing the first of two master-pet separations. Shortly, Wendy finds her canine amid a group of drifters, fireside, with whom she shares her plans to move to Alaska.

Wendy, like this briefly-glimpsed collective, exists on society's margins. Living with Lucy in her 1988 Honda, Wendy very carefully tabulates her relatively meager savings as she journeys to Ketchikan. After being woken the next morning by an insistent, if apologetic security guard (Wally Dalton), Wendy discovers that her car has stopped running. (As she correctly, later instructs her mechanic, her serpentine belt has cracked.) After pushing her vehicle onto the street, and discovering that she has little dog food remaining, Wendy sets off into the ditches where she begins to pick up discarded cans. In line to convert her findings into cash, Wendy willingly gives her bag to a crippled gent who likewise waits outside the can collection machine. (Indeed, a second act of charity will reinforce this emphasis.) As such, Reichardt establishes the same charity-oriented social vision that she introduced similarly at the conclusion of 2006's Old Joy.

With little cash in hand, Wendy thereafter proceeds to shoplift in a nearby supermarket. Catching the protagonist in the act, a straight-laced young employee (John Robinson) drags Wendy into his supervisor's office, where he piously offers that a person who cannot afford to care for a dog should not have one. Persuaded by the young man's screed, the said supervisor has Wendy arrested, leading to a long morning and afternoon in a local jail - and an unhelpful (to say the least) $50 fine. Returning to the scene of the crime, where she tied Lucy up before entering, Wendy finds her pet missing once again, setting off a frantic search that will occupy much of the brief 80-minute picture's remaining duration. Accordingly, Wendy and Lucy directly adopts Umberto D.'s (Vittorio De Sica, 1952) narrative conceit, with which it shares the lost dog plot-point.

Reichardt also summons the memory of De Sica's Bicycle Thieves (1948), and particularly the economic precariousness of that film's protagonists, which is undermined likewise with the loss of its income earner's loss of their primary means of transportation. However, Reichardt's De Sica retread makes no effort to explain how Wendy came to be in the position she is in, given her organizational abilities, the fact that she does not seem to have a substance-abuse problem, and yes, her physical beauty. If the situation in postwar Italy, as described by De Sica and Zavattini, can be considered at least somewhat normative - or at least plausible to the modern American spectator - Wendy's is another matter. While it might be clear enough that there are such economically marginal - and susceptible - figures, especially in this newly-minted recession-era US, making Wendy and Lucy particularly timely to be sure, the question of how such persons are made remains (apart from the very brief suggestion that she is lacking a familial safety net).

Ultimately, Williams's Wendy is a particularly implausible instantiation of the economically at-risk young American. While Reichardt might be afforded some latitude for her casting choice, given Williams's strong performance, her failure to explain how this outlier came into being does weaken the impact of her narrative diagnosis. This leaves the film's viewer wondering how rather than fully allowing for their empathetic participation. In other words, Wendy and Lucy suffers from its unwavering anchoring in Wendy's present, its objectivity in some sense, which is equally the film's aesthetic virtue. Nevertheless, Reichardt, in building on the socially-engaged point-of-view displayed in Old Joy, continues to show herself to be a genuine auteur of the twenty-first century American independent cinema.
Posted by Michael J. Anderson at 9:45 PM