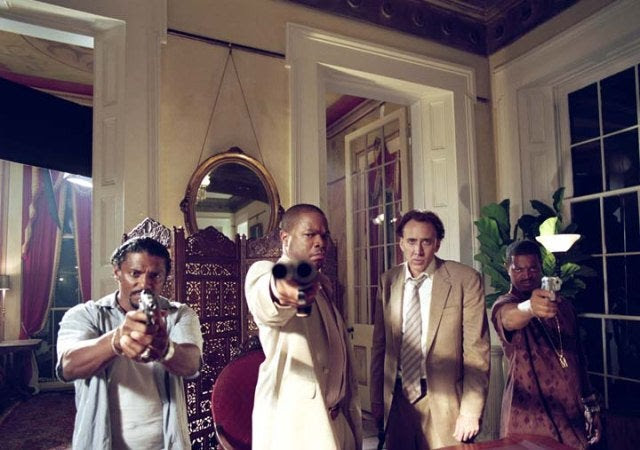 Werner Herzog's The Bad Lieutenant: Port of Call New Orleans, from a William M. Finkelstein screenplay, represents a form of pleasure for which this writer, in his recreational critical guise, rarely advocates, let alone enjoys personally: that of really bad film art. After all, to find pleasure in bad art is to participate in a lesser brand of spectatorship, defined by the location of incriminating details - ridiculed from a problematic position of superiority - compared to the synthetic act required to recognize greater works, whereby the viewer is called upon to map out the form-content relationship that stands at the crux of any quasi-objective aesthetic evaluation. Worse still, spending time with bad art takes away from an engagement of more substantial works, for which there never has been a shortage, even in a qualitatively lesser moment like our own. (As this decade is coming to a close, it has become increasingly evident that the 1990s represented a markedly richer ten year period.)

All of the above is to preface this author's acknowledgment of The Bad Lieutenant: Port of Call New Orleans's interest, emerging from the picture's staggering inexplicability, despite the fact that it remains a remarkably bad work of cinema in most respects. (Those unwilling to make the bad film leap are still making the correct choice in this case.) Indeed, Herzog essentially plays Abel Ferrara's Bad Lieutenant (1992) antecedent, from which its greatest debt is the former's eponymous protagonist, as absurdist comedy - though, and this is where the interest lies, seemingly without screenwriter Finkelstein's awareness. Herzog adds a mournful alligator's close-up, shot very poorly by the director himself in consumer-grade DV, and a ridiculous monologue referencing a sterling silver spoon to the television writer's (N.Y.P.D. Blue, Murder One, L.A. Law) genuinely awful screenplay. It is as though Herzog is sabotaging the film's hoped for franchisability from the outset.

Port of Call shoots for, and easily reaches the realm of the ridiculous through its poker-faced presentation of Terence McDonagh's (Nicolas Cage) unswerving commitment to his numerous vices - crack-cocaine being foremost of these - which the film mixes with its unaccountable passages of sentimental dialogue and scoring, as well as some of the more comically absurd gestures to appear in any recent work of narrative cinema (the film's absolute highlight, for this writer, is Cage's surprise interrogation, while shaving with an electric razor, of two elderly women in their home; Will Ferrell and Adam McKay, eat your heart out). And it does so within the explicit context of a post-Katrina New Orleans, whose location is used to surprisingly sparse effect, thereby adding to the gratuitous provocation of Port of Call's bad taste.

Yet, it is not only the film's taste-level that provokes, but further its unmistakably low quality, as if the legendary German filmmaker was working, from the very beginning, within an imagined "film maudit" genre. This is the cinematic equivalent of a Norwegian death metal artist beheading himself to show how metal he is; and it is as good for Herzog's legacy as eating a shoe was for his digestive system. In making Port of Call the director shows the good sense of Timothy Treadwell, which then again does give Herzog's participation a perverse logic.

The question remains, however, who else was in on the joke. (The reading that the film is not to be taken seriously is to give Port of Call the benefit of the doubt; if it is, something has gone very wrong in its makers' minds. His recent collaboration with David Lynch might suggest, troublingly, that it could just be.) Was Finkelstein? Again, neither his previous credits nor the idea of updating Bad Lieutenant in modern day New Orleans would suggest that he was. How about Cage in what is an epically preposterous, Golem-esque performance - his Leaving Las Vegas (1995) turn perhaps played for comedy, perhaps not? The fact that Cage would sign on at all might suggest that he knew that the film's absurdity would insulate him from what would seem to be an obvious, inevitable scorn. Then again, Cage's insinuation that the film might succeed as a franchise calls this into question. Either way, Cage's 'bad lieutenant' is something to be seen to be believed - and to be quoted ad infinitum.

Fortunately, for his less self-aware collaborators, Herzog does his best to assure that Port of Call will be Bad Lieutenant's lone, unaccountable, if fascinatingly preposterous "sequel." In so doing, Herzog shows a truly remarkable indifference to his personal reputation.
Posted by Michael J. Anderson at 8:56 AM

One of my favorite lines:

Yes. This would be a good place to build condominiums.

After reading your opening paragraph, I'm extremely glad you didn't end up joining us to watch Burt Reynolds movies and eat Popeye's chicken. To waste your time on such a "lesser brand of spectatorship" would be to take you away from very important things, I can see. Just out of curiosity, how do you, the most fervent American Idol viewer I have ever personally known, reconcile that obsession with rejecting the notion of watching "bad film art" as a waste of time that could be better spent recognizing greater works?

(You spelled Will Ferrell's name wrong too, by the way. And Nicolas Cage's.)

Though I object to the snooty tone of your introduction, I saw BL:POCNO tonight and largely agree with your reading. This is a delightfully trashy film. Cage is in rare form (I hope); as to why he would take on this or any project, I have to assume you haven't heard how dire his financial situation is. He's currently suing a former business manager for "bad advice" that led him to "financial ruin." Then again, if you were an actor offered the chance to work with Werner Herzog, and play a character THIS crazy why say no? Cage looks like he's having a grand old time, and more often than not, his enthusiasm is infectious.

I do disagree, however, that Herzog filmed the lizard/alligator POV shots "very poorly." I thought they were magical, and in perfectly keeping with the wackadoo vibe of the film. Frankly, they were the non-Cage highlight for me. I would not have wanted them shot any other way.

Also, am I insane, or did Cage suddenly start using a strangely affected nasal accent about 60 minutes into the film only to abandon it again several scenes later?

I do feel bad about misspelling "Ferrell" and "Nicolas"; the requisite changes have been made. Also, I was not aware of Cage's dire financial straights, though I can't imagine "Port of Call New Orleans" was terribly lucrative. It strikes me as more an exceptional choice for the often surprisingly bankable "Knowing"/"National Treasure" franchise star.

As for my opening paragraph, the point really was to say I don't usually like watching bad movies for their own sake (which you well know, even if I would have loved to have been there for Burt Reynolds - though I still don't know what would have precluded us from watching something with actual potential) but still there is something really interesting here - in no small measure because of Cage's insane performance. Even so, I still had a hard time recommending a work that was so obviously flawed otherwise. Basically, how does one recommend (even tepidly) something that doesn't really deserve to be? This was the problem that led to the preface. I didn't want to give people the wrong impression, that this is unquestionably worth one's time - which generally the films I write about are.

Now to the "American Idol" slander, I really do look at competition television as something different. (However, I haven't watched "AI" in a couple of seasons; I just got so bored of the stupid thing.) I still do watch "Top Chef," "Next Iron Chef," "Project Runway" (inferior with its Lifetime move) and even "America's Next Top Model." I also spend my Sunday afternoons watching the NFL, some college football this season and as always the NHL (though admittedly more sparingly this season with the Bruins and Wild both playing less well, and with Alex Ovechkin out). I see the reality shows I watch to be closer to these than to my film tastes, but either way, I do waste a lot of time.

Well I'm glad you opened up about your reality television viewership. I just want you to keep an open mind about those of us who do derive pleasure from watching a good old hunk of schlock every now and then; man cannot live on 7 hour Hungarian films alone.

And speaking TOP MODEL, next week's finale is going to be big. Laura has really made this season spectacular, I will miss her charmingly innocent presence. I'm also calling it right now: Nicole's terrible hula dance (and Miss Jay's hilariously disgusted reaction) will be on this week's episode of THE SOUP.

"Also, am I insane, or did Cage suddenly start using a strangely affected nasal accent about 60 minutes into the film only to abandon it again several scenes later?"

There's a point to this, which Cage addressed in the Q&A after the Toronto screening I was at. Basically, he tried to "map out the character," how he reacts to the various drugs he's taking, and the painkillers for his back. Which is why you get a couple odd accents and why his posture keeps changing throughout.

I think I like this film more than both of you, for various reasons, but what I feel like is almost inarguable is the excellence of Cage's performance. Here's an actor that, outside of "Leaving Las Vegas," I've never really cared for, and generally think is very safe, even prosaic. But here, there's just so much going on in Cage, it's a really gutsy, varied performance; the kind of thing Oscar would never pay attention to, but should.

Also, I assume you guys haven't seen "My Son, My Son, What Have Ye Done" yet? Well, enjoy liking Herzog while it lasts...