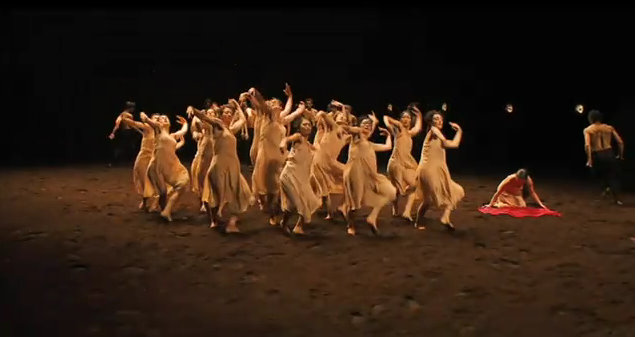 Shot in sparkling high-definition 3D, Wim Wender’s Pina (2011), a warm, engaging, and ingenious tribute to the late, German choreographer Pina Baucsh, cultivates a sense of immediacy and bodily presentness that seems entirely suited to the subject matter. In this respect, Pina has much in common with Werner Herzog’s Cave of Forgotten Dreams (2010), which seeks to make unfathomably ancient cave-paintings accessible to only a few scientists and researchers available to the average cinema-goer. Unlike Herzog – whose musings and preoccupations color and frequently overshadow his spectators’ experience of the Chauvet caves – Wenders carefully effaces his distinctive authorial voice, in order to bring Pina’s unique artistic vision to the fore.

On the whole, the film consists of a series of performance sequences interspersed with brief statements by each of the featured dancers, who intone Bausch’s name with the same hushed reverence. These talking-head inserts are presented as disembodied monologues over screen-test-like shots of their faces; the lack of synchronized dialogue lends the interviews a dreamlike quality that allows them to merge more-or-less seamlessly with the dance sequences. Pina, herself, is featured in a series of black-and-white video inserts that are projected within the space of the film; in a few instances, she appears as a spectral superimposition whirling on an empty stage.

While the film’s personal portrait of Pina Baush tends to canonize rather than humanize or demystify, it nonetheless provides an illuminating introduction to her work. As represented in Pina, Bauch’s choreography is high concept, physically demanding, and undeniably impressive. Over the course of the film, one discerns several of Bausch’s authorial signatures: a number of sequences utilize repetition in manner that conflates choreography and insane compulsion; others explore the ritualistic desire to infuse gestures with incantatory meaning. Some routines play with stiffness and fluidity in a way that recalls Charles Chaplin’s silent comedies. As we become acquainted with the personas of the various company members, we are able to appreciate the extent to which each routine is a marriage of Bauch’s overarching artistic vision and her dancers’ personal styles and physical strengths.

Wender’s sensitive us of 3D depth effects combined with subtle well-chosen camera movements helps to tease out the spatial relationships between the dancers and their environment and to transform bare theatrical spaces into fictional worlds. Conversely, some dance sequences shot in natural settings are less successful, transforming forests and mountains into flat, lifeless backdrops. One sequence, which places miniature dancers inside a doll-house sized version of Bausch’s Café Müller, makes a coy reference to digital 3D’s puppet theater effect. In a performance near the end of the film, Wenders uses simple trick photography to transform young dancers into their older doppelgangers; a charming moment of cinematic specificity that recalls the hybrid cine-dance form popular in the medium’s early days.