What White Collar Is 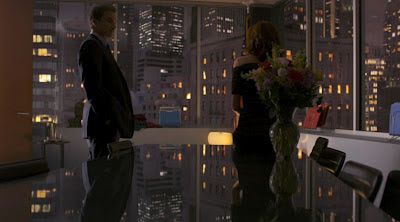 Let us begin with what the USA Network's White Collar (2009-2012) is not: prestige, long-form television  of the HBO-Showtime-AMC variety. It lacks the novelistic structure and density to make it hipster/Slate/coastal water-cooler fodder. In a writer's medium (to cinema's director's art), White Collar is not particularly well written, especially on the level of dialogue - David Milch, Jeff Eastin and company are not. Nor is it particularly well acted in its forty or so minutes each week, especially within a cable world that gives us the extraordinary work of Bryan Cranston, Aaron Paul, Giancarlo Esposito, et al., on television's current best, and most consistently well-acted program, Breaking Bad (2008-2012). In short, White Collar does not correspond to the way that we, which is to say those of us with some stake in elite culture, consume quality television. White Collar just doesn't figure in the public discourse - and understandably so.

What White Collar is, however, is the most consistently visually compelling hour on American television; it is a series, almost without parallel for contemporary works of the medium, that thinks first, and quite a bit, of how to gracefully compose the visual field. If show-runner Jeff Eastin has not created a series that conforms to our idea of what makes television good, he nonetheless has created a visual style of exceptional density and moment-to-moment optic interest that competes with if not outright distracts us from the banalities of what we are hearing. White Collar in this regard tells us one thing about how we in-the-know types watch narrative television: we don't actually attend to the plasticity of the image. When we do consume television visually, it is typically for its sexy mid-century design aesthetic or the undeniable pleasures of seeing Christina Hendricks in a plunging neckline, not that we should take either for granted. 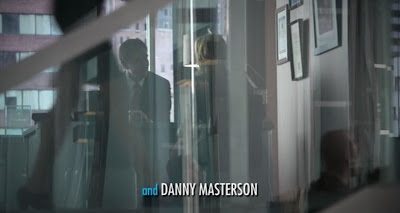 White Collar is different, as the above, more characteristic than you might think image, clearly attests. From about the middle of the first season, Eastin's series began increasingly to attend to the graphic possibilities intrinsic in its Midtown Manhattan settings, with particular attention lavished on its narratively focal high-rise boardroom settings. In this sense, White Collar adheres to USA's loose location-centric house style, which might otherwise be defined by its Sony CineAlta F35 HD camera work - White Collar uses the same technology - and its clean, even lighting strategies. However, there is not an once of White Collar's visual interest in all of Royal Pains' (2009-2012) Long Beach-shot images combined, with the latter opting for shallow medium set-ups tagged with the bright local yellow light. This is just to say that though White Collar shares some of the technical specs and even the fidelity to location of its fellow USA programs - one of White Collar's pleasures for this former New Yorker is its very recognizable mapping of Midtown East, from Gramercy to Kips Bay - White Collar has an aesthetic ambition all its own.

What makes White Collar's visual strategies so singular is again the use the show makes of its New York interior sets/locations. Among the most paradigmatic of the camera crews' strategies - one that since it developed, once again, midway through the first season, has reoccurred in every episode - are its wispy, lateral, mobile travelling set-ups, which cue into the impossibly reflective surfaces that predominate within the show's FBI headquarters in particular. For these typically short though frequently repeated compositions, White Collar's camera crew (helmed by a number of different directors over the course of four seasons) shoot through the space's glass walls as they compress numerous planes into a single, visually quite complex graphic field - one that asks to be looked at first, as we hear the perfunctory conversation on the other side of the semi-visible barrier. Thanks to the stylistic program that Eastin has instituted for his directors and cinematographers, we have the makings in White Collar of a whole new generation of "wagon wheel" Joseph H. Lewis's who have not yet met an intermediate object through which they did not look to shoot (see the lelouch below). 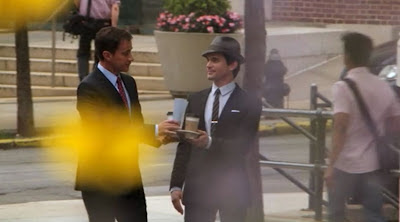 What these 'White Collar shots' encourage, whether inside the show's FBI sets or increasingly in whatever interior or even exterior locations the makers can find to enact their baroque visual program, is a pleasure in looking - a pleasure that I think we can all concede is all-too-often unknown in narrative television. This is the modest, though in another sense significant accomplishment of what would initially seem another USA Network throw-away - another show that cries out for a "What is Burn Notice?"-style parody. Of course, there are other pleasures to White Collar, beginning with Matt Bomer's (pictured right) forceful charisma and abounding sex-appeal, and the easy rapport he has created with co-stars Tim DeKay (left) and Willie Garson. In the terms of contemporary world cinema White Collar is a middle-of-the-road or better Milky Way product to the better respected (and often rightfully so), though also stodgier festival feature; though it might not have what we expect from the best of the art, we would be unwise to sleep on its many commendable qualities. Eastin's show is indeed easy to overlook - at least for those who have not spent time looking at it.

This piece was co-conceived by Lisa K. Broad, with whom I have watched most of the first three seasons, all of which are available on Netflix's instant streaming service.
Posted by Michael J. Anderson at 6:16 PM