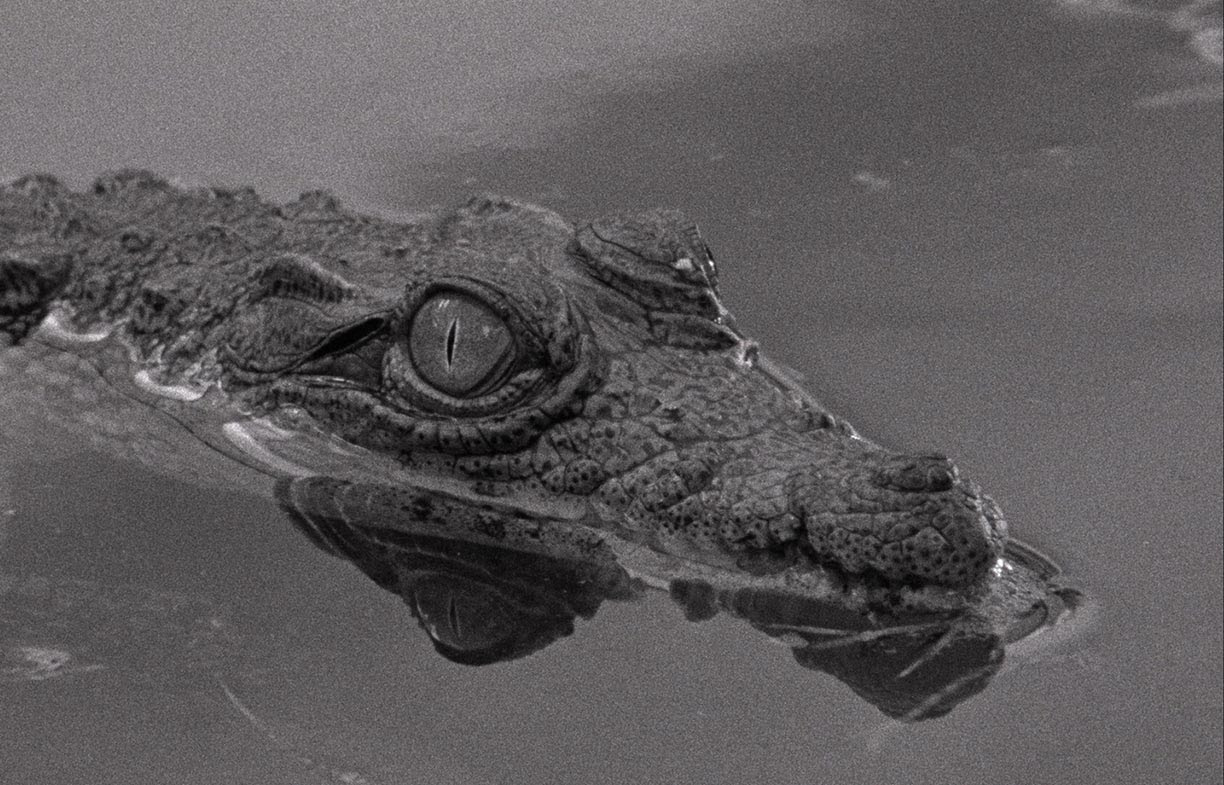 Orchestrated brilliantly in a measureless variation of silky gray tones and underwritten ironically by a light twinkling of ivory, the 35mm prelude for Miguel Gomes's third feature Tabu (2012) subtly sets the internal parameters for the fast-rising Portuguese director's sidelong take on F. W. Murnau and Robert Flaherty's eponymous original. Gomes's robustly referential fiction opens on a dejected intrepid explorer, a Robinson Crusoe-type in darkest Africa, who in Wes Anderson-esque ethnographic voice-over laments the loss of his beloved wife. The latter however will appear as an apparition-like presence to the suicidal bereaved, before taking her place in a still photo beside the now dead explorer's melancholic crocodile alter-ego. Gomes thus infuses the faux ethnography of his crisply cinematic open with a Bataille-inspired surrealism that (together with the Flaherty-inflected former) will continue to obtain, as categorical opposites, throughout the remaining two halves of the forty year-old director's post-colonial, post-structuralist narrative.

Inverting Tabu: A Story of the South Seas's (1931) two-part organization, Gomes's twenty-first century incarnation opens with "Paradise Lost," a Rouch In Reverse bit of first-world ethnography that soon finds first-half lead Pilar (Teresa Madruga) in a semi-fluent English exchange with an itinerant EU traveler. Pilar is then summoned by her elderly neighbor's African servant Santa (Isabel Cardoso) after the aged Aurora (Laura Soveral) loses a fortune at a local casino. Arriving, Aurora confesses her folly, observing that "peoples lives aren't like dreams," before narrating the fantasy (replete with gambling, monkey men, and dead women who fornicate with celebrities) that somehow convinced Aurora to imprudently try her luck. Gomes's luminous black-and-white 35 captures the elegant Aurora, masked by her prominent, dark-rimmed sunglasses, as she narrates her fever-dream atop a slowly rotating restaurant platform. In so doing, Gomes provides a richly lensed, lightly uncanny visual backdrop for what amounts to part one's first incursion of the surreal - a sense of everyday unreality that will return immediately thereafter in Pilar's flare-lit visit to a local Roman catacomb.

As 'Paradise Lost' progresses, Aurora accuses Santa, her fellow remnant of Portugal's colonial past, of devil-worship and witchcraft; she pleads with the devoutly Roman Catholic Pilar to entreat St. Anthony on her behalf (something that the focalized lead will do, impolitely, at a UN protest). In Gomes's Tabu there is no substantive difference between religious belief and superstition; both belong to a category of belief that no longer obtains in part one's alienated, post-Christian European civilization. With Aurora's health continuing to decline thereafter, she begins to speak in a surreal code that will become lucid only with the consequent arrival of "Paradise." Before reaching part two, however, Gomes stages one last set-piece in a liminal shopping-center jungle, which is to say in a threshold space that connects and combines the first half's urban capitalist-twilight with the second part's primitive plantation economics. As Gomes thusly exchanges his Oliveira-esque isomorphic dialogues for voiced-off recollection, part two commences with its very specific and radical aesthetic break.

With 'Paradise' being restored in part two, Gomes replaces the expansive 35mm gray-scales and crystalline conversations of the first half for a grainy 16 stock and even more conspicuously, a non-dialogue soundtrack (which nonetheless incorporates post-synchronous sound effects and even vocal pop performances). That is, Gomes trades in the loss of sound cinema for the paradise of Murnau's silent-shot, post-synchronous sound original. Of course, in dividing his film into sound and silence, 35 and 16mm - with a brief, super-8 home movie diversion in part two - Gomes procures a vivid sense of technologies and textures that, in the contemporary aftermath of the digital turn, speaks to the filmmaker's overriding scholarly impulse. We see this same instinct likewise in the filmmaker's encyclopedic approach to the stylistic figures (from the festival long-take to trick POV set-ups), media forms (the still image, the films within the film of part one, and even the Blissfully Yours-inspired scribbling on the image) and most distinctively of all, the modes of narration that structure Gomes's Tabu (the mimesis of part one, voice-over diegesis of part two, and the letters that conclude the film). As in his very fine Our Beloved Month of August (2008), Gomes seeks to include everything in his 2012 follow-up.

If the latest Tabu is most obviously a consummate work of historical reference and obsessive piece of postmodern scholarship, this is not to suggest that it, in any respect, lacks more conventional narrative and psycho-sexual pleasures. The adulterous, taboo romance of the young Aurora (Ana Moreira, pictured, in 16mm) and her globetrotting musician lover Ventura (Carloto Cotta) will provide many of the film's more lusty pleasures, while the Iberian translations of "Be My Baby" and other period pop hits introduce a kitschy experience of nostalgia that is no less immediate. However, as pleasures go, there are none more bracing - and memorable - than Tabu's densely luxurious black-and-white visuals.

New York-based Adopt Films will be opening Tabu at Film Forum on December 26, with a series of single dates to follow, including Minneapolis's Walker Art Center on January 11.
Posted by Michael J. Anderson at 12:20 AM

I absolutely loathe Our Beloved Month of August, but Tabu is in many ways a big leap forward for Gomes. However, I'm still at a loss in regards to what he actually wants and what he tries to communicate with his films. Why is Tabu molded after Murnau's classic? Why does it concern itself with Portugal's colonial past? Why does Gomes (again) mix documentary and fiction? How (and, again, why) do the two parts of Tabu complement each other?
Gomes still favors style over substance in every way. And i have a problem with his uncharismatic casting. After the film ended I could hardly recall any of the characters' faces.

In my opinion Pedro Costa does everything Gomes does far better and with much, much more resonance. And in a completely different style, of course. The big difference is that Costa says (and communicates) a lot whereas Gomes (to me, that is) doesn't say anything at all.