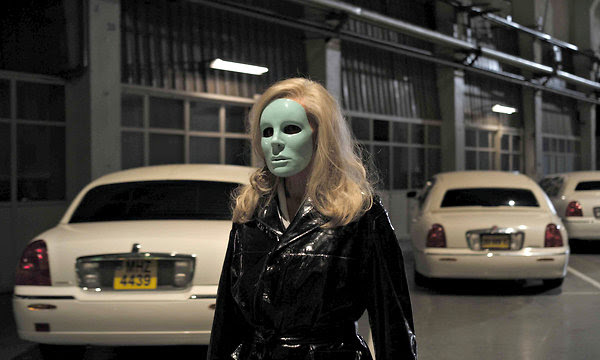 A work of enterprising vision and aggressive newness that finds all narratives exhausted, Leos Carax's Holy Motors (2012) emerges as one of the year's most fully realized ruminations on the current and coming status of film art. With flash Muybridge inserts, Hugoesque fiction and a battery of prosthetic disguises, Carax's first film in thirteen years brings the century of cinema's invention into contact with the incidence of its digital expiration and even its extrapolated fictionalized future. Holy Motors is a film without an outside, a cinema that is all cinema - a cinema as dream, in the spirit of Carax's opening metaphor - that nonetheless feels the fatigue of the productive act in the ages of the DCP multiplex, satellite broadcasting and inevitably, Internet image-making.

Holy Motors constructs its allegory for the twenty-first century artefactual experience as a omnibus-style sequence of nine "appointments" (in addition to a reflexively surreal prologue, de-constructive musical intermission, and post-human epilogue) that the aptly named M. Oscar (Denis Lavant) keeps over the course of a single, extended work-day. Chauffeured to each by professional associate Céline (Édith Scob, pictured, beneath the mint-green mask), Oscar is charged with incarnating a series of disparate figures that he cometically contrives in the spacious backseat of stretch limousine. (Holy Motors almost inevitably suggests an aleatoric companion-piece to David Cronenberg's fellow Cannes premiere, Cosmopolis; 2012.) In thus relying so exceedingly on the mise-en-scène of the celluloid index (make-up, costuming), Carax's film openly resists the transformative capacities of digital editing.

What Holy Motors opts for instead is already and more profoundly present in Muybridge: the movement of a body in space. In Carax's latest, the ubiquity of Lavant's physical presence suggests nothing less than the displacement of the traditional film index onto the actor's body. In fact, the body is so central to Holy Motors that it remains the focal presence even when it is submitted to technological effacement: in the instance of M. Oscar's employment as a motion-capture actor, it is not the animated adult-fantasy imagery that provides the chief source of the passage's spectacle, but rather the astonishing bodily contortions performed by Lavant's co-star (in addition, of course, to the glowing abstractions produced by the body-suit sensors). In any case, it is the body in space once again that perseveres as Carax's subject - even when it is submitted to digital conversion.

Oscar's fantastic motion-capture 'appointment' contributes to Holy Motor's comprehensive cataloging of genre, with forms as disparate as Gothic horror, deathbed melodrama, the musical, and science-fiction comedy also included in Carax's encyclopedic project. This same omnibus structure equally serves to inscribe the changing cultural tenor of contemporary Paris: indications of radical Islam, single-parent households, demographic exhaustion and (of course) celebrity all emerge over the course of Carax's nine-part narrative. (In attempting on some level to contend with Paris as it is now constituted, Holy Motors achieves a surface-level contemporaneity that is absent all-too-often among art-house French imports.) Finally, Carax's shifting subjects and settings afford the director the opportunity for revisiting his own cinematic past, from the return of his "Merde" (2008) sewer-dweller to the sparkling nocturnal presence of Les Amants du Pont-Neuf's (1991) focalized structure.

It is Paris ultimately that completes Holy Motor's historically grounded sense of the cinematic index. However, it is a Paris that the spectator will never fail to behold without the filmmaker's self-conscious mediation. Holy Motors is cinema that perpetually reminds its viewer of its status as fiction, explicitly transforming the often familiar, though rarely less than fresh narratives that surrealistically unfold as a series of acting 'appointments' into the stuff of the capitalistic commodity. Holy Motor is a film for our media-saturated moment and one of the few releases of 2012 that might just merit the title masterpiece. Minimally, Carax's latest represents a career peak for the director, and at the risk of damning with faint praise, a new high for the filmmakers of France's Cinéma du look.

This review was co-written by Michael J. Anderson and Lisa K. Broad.

Holy Motors is currently being distributed in North America by Indomina Releasing.
Posted by Michael J. Anderson at 11:38 PM