More Than Meets the Eyes

Given my recent move from an increasingly sketchy block in the Bowery -- think of that -- to the outer-reaches of brownstone Park Slope, a switch of allegiances was in order from Central Park's Summer Stage to Prospect Park's equivalent, Celebrate Brooklyn. Good thing the former decided to go in a strangely anachronistic first-wave Lilith Fair direction this summer, while Celebrate Brooklyn's highlights centered upon a more palatable series of silent movie screenings, accompanied by big-name instrumental outfits, such as last night's teaming of indie demiurges Yo La Tengo and the underwater films of French auteur de science Jean Painlevé.

With Yo La Tengo being for me the more known quantity (though I will admit that my interest in them is relatively minor) Painlevé would be the true wild card in the evening's entertainment. Suffice it to say that sea creatures delivered swimmingly though the three-piece looked like they had found their born vocation: scoring crustacean films. Before I speak further to the source of the films' relative quality, let me say of the performance that Yo La Tengo recommended themselves both for their admirable dexterity in inventing scores that seemed perfectly attuned to the animal life depicted in each of the unique shorts as well as for the compositions' success in propelling the loose narratives, and also for their execution of the individual pieces, which never once impeded upon the patient biological poems. Yo La Tengo weren't the stars here, as much as they deserved to be.

No, the sea horses, the baby jellyfish and octopi took center stage last night, showing that Painlevé's shorts have lost little fascination since they were first screened nearly eighty years ago. Ultimately, the same factor that made them extraordinary then still make them extraordinary today: they show us a real world that we wouldn't otherwise see. Indeed, it is here that one might imagine these films as exemplars of an Epsteinian view of cinema's vocation -- they improve our perception of the real world. Not only, in fact, does Painlevé greatly magnify his often invisible to the naked eye subjects, but he slows down the stock to lay bare their mechanics. In this way, one can see cinema's potential for artistry, not in transforming reality into something different or even in showcasing it unmodified, but rather in dissecting it through the tools at the filmmaker's disposal. Again, Painlevé's corpus allows us to see what we could not ordinarily see. They stand as an ontological definition of the cinema in their own right, now decades behind its time theoretically, but still with the power to awe in their capacity to capture the invisible beauty of the real world.

Which leads me to another recent screening which now strikes me for its similar purpose: Richard Linklater's A Scanner Darkly. Like the Painlevé corpus, A Scanner Darkly proceeds according to a desire to improve upon optical limitations -- in this case, the external world versus an internal one. From the opening sequence, Linklater highlights an interest in representing the drug-addled subjectivity of his characters. Using roto-scope technology, which effectively translates live-action filmmaking into animation (which he famously introduced in 2001's Waking Life) Linklater externalizes the drug-fueled hallucinations -- the archetypal crawling insects -- that open the narrative. From here, the selected technology, which of course possesses a ready-made link to its subjective content, is best utilized in visualizing Dick's own extra-realistic creations -- as with the suits that continually remake their form, selecting from millions of separate details of bodily appearance. 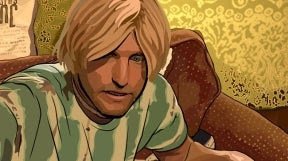 As far as its capacity to illuminate, however, Linklater's film remains subject to the limitations of his and source author Philip K. Dick's perspectives on the topic. If A Scanner Darkly is supposed to be a critique of the drug wars as some critics have suggested, the paranoia of the film's narrative would seem to unhinge any reasonable negative criticism of said policy. If, as seems more narratively justified, A Scanner Darkly is a memoriam to those friends of the creators' who suffered the unjust rewards of addiction, then one wonders what function A Scanner Darkly ultimately serves: what does the film help us to understand; what makes it persuasive of anything, other than the dangers brought about by drug use, which we are nevertheless reminded are somehow unfair? Of course, one could rejoined that the Painlevé films offer little more purpose than to see, which is about what A Scanner Darkly does as well. Then again, what the shorts provide is a glimpse at something true, and more than that, something beautiful; they are sustained, asetheticized conveyances of a reality that our eyes do not allow us to see.

This is not to say that A Scanner Darkly is absent of any merit: particularly of note is Robert Downey Jr.'s appropriately "animated" performance. Even Keanu Reeves seems to have found his ideal performative venue -- the cartoon junkie everyman. Yet the film's self-indulgent lamenting, to mention nothing of the supremely uninteresting quality of its characters and their lives, makes A Scanner Darkly far from a pleasant affair. Unfortunately it offers neither depth of insight or beauty to mitigate against that first strike.
Posted by Michael J. Anderson at 6:56 PM

I went to Summerstage on Sunday to see Amadou and Mariam, the blind Malian couple who are World music superstars.

Let's just say they deserve to be. The catchiest feel-good music I've heard in a while, plus phenomenal guitar solos.

So yeah, it's not all Lilith Fair fare.