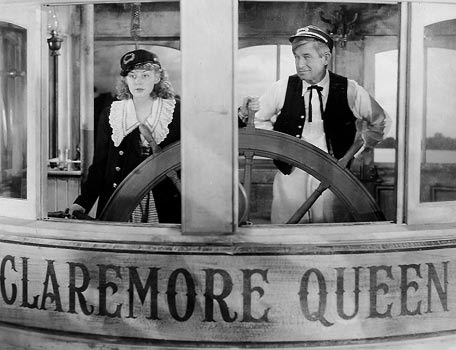 As the story goes, in 1950, during a heated debate of the Director's Guild of America, John Ford stood up and introduced himself in the following manner: "My name is John Ford, I direct Westerns." Ever since, this avatar of the Western genre has born the epitaph in the same way that Hitchcock has the title of "master of suspense" -- as a slightly derisive, although not entirely incorrect signifier of their primary contribution as a film artist. Of course, Ford did work outside of the Western genre on occasion, producing works that rivaled, when they didn't equal the best films he made in his signature genre (such confirmed classics as The Grapes of Wrath, How Green Was My Valley and The Quiet Man all come to mind). Still, Ford has and undoubtedly will remain the leading formulator of the American national myth in the genre best-suited to the subject.

Indeed, it is significant that Ford's subject was largely consubstantial with the Western genre itself when one considers his legacy outside the immediate contours of this famed category. There are, for instance, the three films he made with legendary Oklahoma-born humorist Will Rogers in the mid-1930s -- Doctor Bull (1933), Judge Priest (1934) and Steamboat 'Round the Bend (1935) -- each of which showcases the pair's overlapping interest in Americana, though again from a position outside the Western genre (though, for the sake of full disclosure, let me add that I have yet to see the first of these three and am relying upon secondary sources). In part, the difference between these films and those of his western corpus are their settings: New England, the rural South of the late 19th century and the Mississippi Delta respectively. Nevertheless, as is evinced by the third of these films, Steamboat 'Round the Bend, which will be released on DVD July 25th as part of the Will Rogers Collection, Vol. 1, even the director's non-western subjects allow Ford the space to parse the myth that he was instrumental in creating -- the foundation of an American civilization.

To be sure, Steamboat 'Round the Bend represents a near complete grafting of the Fordian western onto the setting of the Mississippi delta; liberally, the mid-west. First, there is the mega-theme of the creation and persistence of civilization in a hostile environment, which has since been ascribed the generalization of the garden-desert dichotomy. Here, Ford opposes the riverboat people, exemplified by Will Rogers' Doctor John and his nephew Duke (John McGuire), and the so-called "Swamp Trash," one of whom Duke slays in response to their mistreatment of a young beauty from their ranks, a Fleety Belle (Anne Shirley). While it is agreed that Duke acted with justification, Dr. John nonetheless prevails upon him to turn himself in, thereby upholding the rule of law in the midst of the lawlessness of the swamps. That Dr. John and Duke conclude in this fashion demonstrates their deep faith in the institutions of civilization, even as it might mean that the latter will be hung due to the absence of the killing's one witness, and the one man who might exonerate Duke -- the New Moses, one of the River's self-styled new prophets.

Meanwhile, the Swamp Trash, looking for Fleety Belle, arrive determined to exercise their mob rule against the girl and her supposed corrupter. At this point, Dr. John intervenes, claiming that the pair are married and are therefore above their recriminations. While initially this isn't the case, Duke and Fleety Belle do eventually tie the knot in a courthouse ceremony, which Ford invests with a sacramental significance -- the large group of mostly fugitive witnesses turn away from the newly married couple, respecting the intimacy of their marital union as they hold each other in their make-shift prison chapel. It is, in the parlance of Andrew Sarris, a moment of pure chivalry, prefiguring that wonderful moment in The Searchers (1956) where the Reverend diverts his gaze as Ethan Edwards' sister-in-law studies her relation's military uniform. In gestures like these, Ford's worldview seems to become unassailably virtuous.

This is not to say, however, that Steamboat 'Round the Bend is without humor. It is, as a matter of fact, a film whose comedy touches on the grotesque, particularly when a mobile wax museum becomes kiln for Dr. John's racing steamship, and subsequently when Duke is granted his last request of seeing the completion of the steamboat race which, unbenounced to him, his uncle has entered in order to reach the governor before the hanging can take place. Once the steamboat rounds the bend, the hangman rushes to get the job done with a perversely good natured-efficiency and conviviality.

Buffeting these events, particularly on the boat, are the alternately manic and committed performances of Stepin Fetchit and Berton Churchill -- New Moses in the flesh -- respectively, to say nothing of the more mild-mannered witticisms of Rogers. (As to Fetchit's performance specifically, suffice it to say that it hardly holds up to the scrutiny of contemporary political-correctness, which of course says less about the quality of the film that it does the mores of the past and the present.) As with many Hollywood films of this moment, it is sustained by its brilliant supporting players -- Irvin S. Cobb as Captain Eli is another notable. Similarly, Steamboat 'Round the Bend also features a series of well-lit interiors, especially on the steamship, that remind us once again that Gregg Toland did not invent depth-of-field. Moreover, in the more global, early sound cinema sense, Ford's film demonstrates a fascination with curios, whether it is the traveling wax museum that Dr. John & co. manipulate to impress a rather close-minded community of Confederates -- before tossing it in the fire -- the saw that Duke plays in jail (here's your singing cowboy) or the revivals that take place up and down the Mighty Mississippi.

Speaking of religion, Steamboat 'Round the Bend also manifests a specifically Fordian view on the subject that is not always so clear in the director's work. Taking the director's final film, 7 Women (1966) as a template -- assuming that he has sympathy at least for Anne Bancroft's irreligious doctor -- one might surmise that while the director is not himself religious in his orientation, he does allow that there are some with this view who nevertheless can be considered good -- yes there is something vaguely ridiculous and mocking to figures like the New Moses, who Ford compares expressly to the spirits' peddling Dr. John, who medicates the people with an elixir he calls Pocahontas in a manner comparable to the New Moses and his old-time religion; Ford opens the film, importantly, with these two salesmen. However, when called upon, New Moses does come through, and with a certain gusto that succeeds in making him sympathetic, if not endearing. If anything, Ford's view on the matter might be characterized as at once agnostic and also respectful of its function in producing the civilization that counteracts the lawless mentality of the desert… and the swamp.

Returning, indeed, to this over-arching division, if the swamp is in fact a place for anarchy, the river is a space where civilization counteracts this less ignoble tendency -- it is the settlement of Tombstone or the Edwards' homestead to the surrounding wilds. Here, a sort of para-civilization rules, exemplified by not only Dr. John's steamboat -- which importantly is piloted by the young Fleety Belle who has exchanged a tablecloth for an antebellum dress -- but also by the religious services, the communities that hug the thoroughfare, and even in the steamboat race that concludes the film: rivalries are resolved not through vigilante justice but in carefully-regulated contests that of course feature just as much cheating as a film of Steamboat 'Round the Bend's light comic tone allows.
Posted by Michael J. Anderson at 3:12 PM